Music, in particular singing, has always been a very big part of my life, in fact I can never remember a time when it was not. I remember the big family shindigs as a child all the Aunties, Uncles and cousins gathered around the piano singing and playing guitar's and banjo's.. something.Those nights were always big happy affairs with cake, cordial (well, for the kids anyway) there were lots of stories and people laughing. I'll always hold very fond memories  of those times.

A friend of mines mother was an opera singer with the Adelaide Opera Company. When I was 17, I got in touch with her singing teacher at Adelaide Conservatorium of Music and started to learn classical singing myself. His name was Donald Munroe and he was the singing teacher for the Adelaide and Sydney Opera Companies at that time. His advice to me was to go busking and implement the new techniques he had just shown me.

The picture below taken in the Rundle Mall in Adelaide is one of the first times I ever went busking. I remember we were both very nervous - I am the devilishly handsome looking shorter fella with the George Harrison-esque looks. The other guy is Steve Opitz an old school friend, a huge influence on me musically, and a great guy. 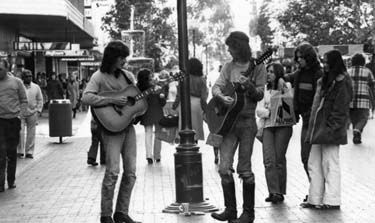 In my early twenties I bought an old Kombi van and took off exploring. I teamed up with a couple of guys in Melbourne we were known as Capricorn Express... you guessed it, all Capricorns. Two of us were even born on the same day. We were a good tight little act too. An acoustic guitar orientated three piece act specializing in vocal harmonies and punchy rhythmic songs.

It wasn't long before were playing supports for acts like the Bushwackers, Matt Taylor and Chain and several other name acts of the day. We also had a steady flow of our own pub and cafe gigs. Like many bands we to had a use by date and we eventually parted company and went our own separate ways. I was pretty keen on pursuing a solo career, so I decided to return home to Adelaide and try my hand at that.

Arriving in Adelaide I quickly found my first solo gig at a tavern called the Norfolk Tavern. It was an underground dark dingy little place where your shoes actually did stick to the floor it was located right in the heart of the Rundle Mall and was affectionately known by the locals as "The Snake Pit". The place was frequented by all manner of shady types, who were good guys really providing you didn't ask too many questions about how they were making their money. As much as I liked living in Adelaide, the music scene there slowed almost to a standstill during the winter months so I decided to try my luck elsewhere.

I left Adelaide and headed out across the Nullabor Plain to Perth. The music scene there was good too, I was kept reasonably busy. For two and a half years I hung out in Perth and Fremantle playing at all the different venues. I got itchy feet eventually and decided to move back to Adelaide. Once again I set about building a little circuit for myself as a solo singer guitarist. I also branched out and joined a rock band as the lead singer. So it was back to  classical singing lessons again.

The singing teacher everybody was going to in those days was a guy called Malcolm Potter he had trained John Swann and rumor had it his half brother Jimmy Barnes as well among many other great singers. Anyway, any serious singer in Adelaide at the time was being trained by Malcolm and that was a good enough recommendation for me. The Adelaide winter once again proved to be just too hard a task master.

The Top End and Cairns

I went to Darwin and landed the residency as the musician/entertainer at a place called the Melia, a prestigious high rise hotel motel right in the heart of town. I was booked there 3 nights a week for about 8 months. I liked Darwin but it had quite a small music scene and there wasn't really enough regular gigs for me there to make a living. I decided to move on. Next stop Cairns - Nth Queensland.

Like an economic refugee (finally get to use that line) in search of a better life, I arrived in Cairns. I have been living in North Queensland ever since. I have played at just about every venue going in that time between Port Douglas and Townsville including a few stints out at Mt Isa performing in various venues the Rodeo weekend there.

Between mid 2006 and early 2011 working full time as the solo singer guitarist/entertainer at Dunk Island Resort until it was shut down by tropical cyclone Yasi back in early 2011. For the most part I played 6 nights a week in the Main Bar to the in house guests. I also played for many of the weddings and corporate functions there as well.

New Years Eve - 2012/2013. I supported Boom Crash Opera on Fitzroy Island  that was a great gig over a thousand party goers seeing the new year in.

I was impressed with the energy of Boom Crash Opera, they worked hard and really nailed it.. I got a very good response too.

June 2013 - Townsville Casino I felt privileged to be asked to support one of my all time favorite Australian acts, Richard Clapton in an outdoor concert at Jupiters Casino in Townsville.

I felt like I was playing at "Big Day Out" or some sort of music festival. I got to meet the man himself too, he's one of those seemingly ageless characters who still looks much the same as I remember him on TV as a kid.

May 2014 - Mission Beach Resort. Played support act for Diesel that was a biggie and hey that guy can really play and sing.The place was packed to the rafters.. dead set he is an amazing talent.

He thanked me afterwards for warming the crowd up for him which I thought was pretty cool thing for him to do.

He's one of those types you meet him and after 5 minutes you feel like you have known him for years, very easy to be around.